0
Actually we did it again, as in Lynn and I. We were responsible for the Boston Red Sox winning the World Series and consequently the Astros getting knocked out (oops!). This makes it the third time that after we attend a professional sporting event (not in Houston), that team will subsequently win the championship for that season. The other two occurrences happened with the 2014 Seattle Seahawks and the 2016 Chicago Cubs.

3-peat Sept. "Student of the Month" 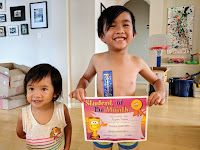 Tyson got "Student of the Month" for September! This makes it the third year in a row in which he got recognized on the first month of school. He did it in Kindergarten and in First Grade. Really proud of him. Unfortunately, he stripped off his clothes before I could get a proper picture with him and his award.