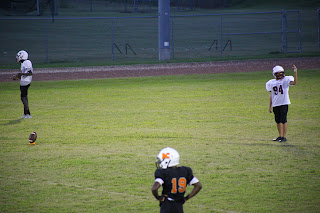 We officially have our first (and probably only) football player of the family, Andrew. He's on the school's 8th grade football team. Granted, he's only a kicker but a football player nonetheless.
My main concern was him getting hurt. First of all, he's not a football player. Second, he's pretty small  when compared to the other players. But being that he's a kicker, it's not likely that he'll have any contact... or so I thought... 😧
Read more »