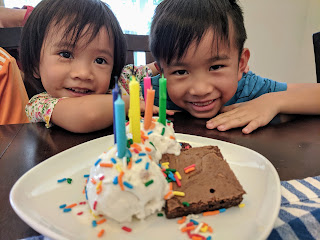 Last weekend we surprised Tyson with an early birthday celebration. For one, we're going to be traveling back to back so just in case we're too busy to plan anything, at least we can say we did this for him. Two, his birthday is forever close to mine (two days after) so this spreads out the birthday celebrations. Three, I was going to give him a laptop for his birthday but wanted him to have it now so that can he make use of it during our trip. And Andrew saw right through me. Right after Tyson unwrapped the laptop, Andrew says, "Ohhhhh. Now I know why we're celebrating his birthday early." Obviously, I had to lie and told him he was wrong. 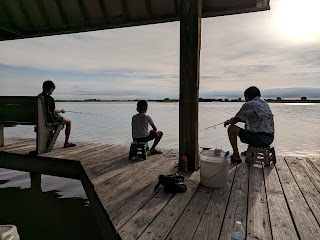 To celebrate my dad's milestone birthday, we got a waterfront house for the weekend so he can do what he enjoys most... fishing. But with what would eventually become Hurricane Barry approaching, I was close to canceling the trip. Can't really fish with a storm barreling in. But on the final day to cancel (without losing tons of money), we decided to keep the reservation. And it paid off. It didn't even rain in Galveston except for a few spotty light sprinkles. My dad thoroughly enjoyed fishing and so did the kids (especially Andrew).