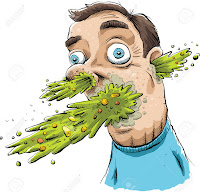 It's now April and we're still sick... it's been on and off since February! There were a few days in between where we were all "healthy", like during Spring Break (thank goodness), but there has been at least one person sick. A couple weeks ago it was me with flu-like symptoms and I was out of commission for a week. Then last weekend it was Andrew with a stomach bug (barf & poop) and it spread like wildfire. Now Jacob, Tyson, Elliot, and I have the same stomach bug. As I'm writing this, Lynn is at home with three sick kids (only Andrew went to school) and I'm "working from home" but I can barely focus. I'm just trying not to shit myself.