For almost the entire month of February, there has been at least one person sick in the family. First it was Jacob with pneumonia that lasted forever. Then baby Elliot with her fever, runny nose and snot eating. Then Lynn with her cough and raspy voice (which I'm actually diggin'). Now Tyson has a crazy high fever that's lasting for days (like Jacob) but add in barf. Lots of it. Barf on carpet is the worst.  He too got an X-ray to see if it's pneumonia (results pending). 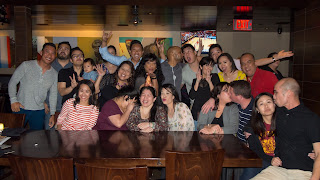 Last weekend we celebrated Venus' 40th birthday. The big four-oh. When I hear 40, I immediately think that's old. Then I quickly realize that I'm not too far behind. In fact, I still don't feel like an "adult". That title belongs to my parents, aunts and uncles. I will forever be a "kid" although my body is telling me otherwise. 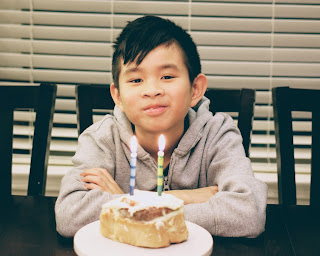 One week before Jacob's birthday, he got sick. He was tired with a fever and no other symptoms. No big deal, or so we thought. Then comes his birthday is he's still running a fever with a nasty cough. So we finally take him in to see the doctor, who wanted an X-ray, which then confirmed that he had pneumonia. Yikes. He was out of school for an entire week. Classmates made him birthday/get well cards, which was really thoughtful. He finally semi-recovered by Sunday and I took him, his brothers and cousins to Monster Jam for his birthday. What a week.

Another weekend, another wedding. Who gets married during Super Bowl weekend? My friend Johnny, that's who. I've known him since we began pharmacy school together... nearly 17 years ago! And I had the honor of being one of his groomsmen. The wedding festivities were all in Galveston, St. Mary's Cathedral Basilica (ceremony) and Hotel Galvez (reception), which was a good thing considering Houston was crazy congested with the Super Bowl in town.