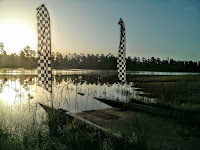 If you had asked me ten years ago if I wanted to do a triathlon, the answer would have been an emphatic, "Hell no." Back then I was too busy eating anything and everything, drinking recklessly and not exercising. But eventually I found the errors of my way and wanted to live a healthier lifestyle so I modified my diet and started to incorporate exercise. In the beginning, my goal was to simply run a mile without stopping. After years of persistent exercise and always looking to improve myself, my latest goal was to do a triathlon. And that happened this past weekend.

Last month my friend Steve asked if I wanted to do the XTERRA off-road triathlon. Here is the description of the race (taken from their website): The race starts with an 800m swim in a pristine private lake. Next wind your way through an extremely fast 11 miles of single track trails with an occasional jeep road all set among Texas pines. The race finishes with a 6k run around the lake. I was like, "Sure, sounds fun." Or so I thought...


Open water swimming versus swimming in a pool is totally different. If you get tired in the middle of the lake, you can't just stand up or swim to the side to rest. You're screwed. And in the lake, you can't see but maybe a couple feet in front of you. It's like swimming with your eyes closed. So when I (stupidly) thought about those things during the swim, I panicked. "Oh shit!" I had to keep telling myself to focus and calm down. After what seemed like an eternity in the water, I made it out without killing myself. But by then, I was exhausted.


Next came the "it sounds like fun" trail ride. In a traditional triathlon you would be able to cruise at a steady pace on a smooth, paved road as opposed to this race where the paths were narrow, winding, muddy and full of dips and bumps. Before this race, I had never rode a bike trail. I don't even have a mountain bike! (I had to borrow my brother's bike.) My lack of training was apparent and I got punished for it. I had some spectacular crashes. I'm talking about body flying over the handlebars. Twice. After those crashes, I lost it. I was physically and mentally drained. After completing the first lap (two laps were needed), I had to bow out. Had I continued, I would've hurt myself even more. Guaranteed. Yeah, I was quite disappointed in myself. :(

The last part of the race was the run. In my head, that was the easy part. But that's all relative. My body was shot at this point but there was no choice except to power through. So with wet and muddy shoes, I was off. It wasn't so bad but then a quarter of the way through, both of my thighs severely cramped up. It got crazy tight and hurt like a motherfucker. My mind was saying go but my body said no. I physically could not run. It was a sick feeling.


After three hours, it was all over. That was definitely the hardest race I've done. For being my first triathlon (or anyone's first for that matter) this was probably not the best race to do. But after being defeated and getting my ass kicked, I really want to try another triathlon. Train better. Harder. Smarter. To conquer the swim. To run without cramping. I'll just make sure it's not an off-road tri. :)
Email This BlogThis! Share to Twitter Share to Facebook