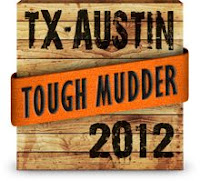 This past weekend we headed up to Austin to run the Tough Mudder. After doing a couple 5k mud runs, this was naturally the next step. Tough Mudder is a 12-mile course that included 22 obstacles, ranging from submersion in ice water to getting electrocuted. This was no joke.

All the training and all the running was for this one race. I was a little nervous but there was no need to worry since we were doing this as a team. Team "Fueled by Pizza". Not trying to sound like a tough guy (I'm far from it) but it wasn't that bad at all. Thankfully to all the running, my cardio was beastly. Don't get me wrong, the course was still tough but it was hella fun. Some memorible moments:

After doing this event, the previous mud runs seem like child's play. I like the fact that some of these obstacles were nearly impossible to complete without teamwork. The "leave no man behind" mentality made it that much more fun. Now we need to find our next big race.

Here's the rest of the weekend, as seen through my cell phone camera: