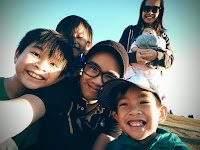 This last weekend Lynn and I celebrated our 7th year anniversary. In the years past, we tend to do something "special". On our first anniversary we went to Tahoe. In 2011, Park City. 2012 was an outlier because we didn't do anything but tend to vomiting and pooing kids. 2013 we're in Breckenridge. 2014 we're back to Utah. 2015 was spent in Houston being a tourist and eating the best food in the city. So for 2016, we gotta do something big right? Nah. Not with baby Elliot in the picture.

But I'm fine with that. It's more fun to celebrate as a family anyway. :)