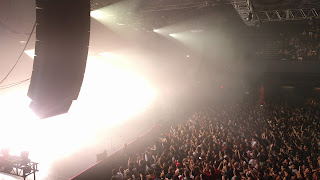 If you squint hard enough, you can see Flume in the middle of the blinding lights. Let me preface this post by telling you the obvious, I'm old now. So my account of his concert is probably different from everyone else's experience. First of all, it started on 9 p.m. on Sunday, which means after the opening acts, Flume won't come on until way later (11:20 p.m. to be exact). Doesn't he know that's way past my bedtime?


The days of standing in the general admission area are over. I don't have the energy to stand and "dance" for hours on end. I'm old remember? We sat in the upper tier, which is okay if you don't mind giant speakers blocking your view. As for the concert, I didn't think Flume was that good. I mean, I love his music but the concert wasn't any different from me playing his songs at home. Sometimes he would abruptly stop his song to play the next song. There was no smooth transition. His performance was underwhelming.


But it's probably the old gramps in me talking. I'm sure it would've been badass if I was ten years younger, had no kids and drunk out of my mind. This doesn't change the way I feel about his music though, it's still awesome.