What's a parent to do? 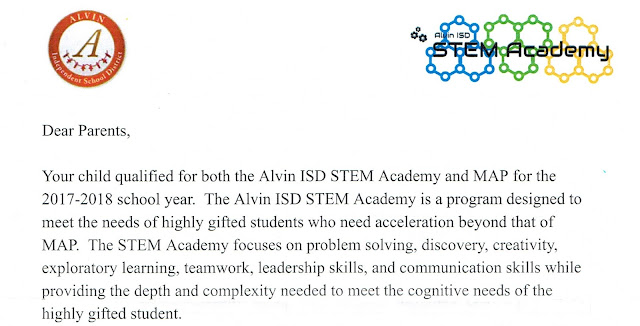 As you may already know, Jacob will start junior high this coming fall. During their course selection process, all 5th grade students got tested to see if they would be eligible for a more advanced curriculum. And what do you know, Jacob qualified. But now we have a dilemma.

He got accepted into the highest program that's offered at his junior high, MAP (Magnet Academic Program) which is an accelerated curriculum, e.g. learning chemistry and physics in 8th grade. Most (if not all) of his friends made it into MAP. But he also got accepted to the STEM (Science Technology Engineering Mathematics) program, which is another level above MAP.

Only a very select group of kids from all over the district get chosen for this program and none of his friends made it. This only matters because he'll be going to another school, away from all of the familiar faces he's known for years. His best friend has been in the same class with him since Kindergarten.

When he got the acceptance letter, he immediately said that he didn't want to do STEM. Initially I was okay with that, mainly because it was at another school much further away and I didn't even want to think about the logistics. I blew it off without giving it much thought. But then I was like, why not? This is a rare opportunity that only a few kids get. Last year, only 27 kids got selected (23 accepted) out of the fifteen elementary schools in the district. Those are some terrible odds and he made it! Why would we throw this opportunity away?

Ultimately, I want him to be the one making the decision. But maybe we can sway his decision, convince him that one choice would be better than the other. But what is the best choice? We don't know.

What's a parent to do?


Update (5/16/17): After attending an informational meeting on STEM and seeing the projects the kids were doing, Jacob has decided to do STEM. "I can't wait until 7th grade! We get to build drones!" It was totally his choice and we didn't have to do a thing.
Email This BlogThis! Share to Twitter Share to Facebook