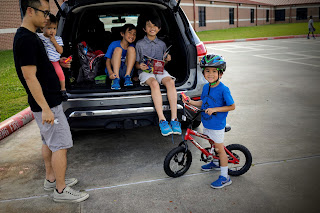 At 5 years old (three months before he turns 6), Tyson can now ride a bike, beating his two older brothers. Granted, I'm not sure if the older boys would've picked it up earlier because I never pushed them to try as I did for Tyson.

It all began when we saw one of Tyson's soccer teammate, who's only 4 years old, rolling up to practice in the world's smallest bike (actually the same 12" size as Tyson's) and I thought, if he can do it so can Ty.

After a couple of sessions of practicing (and the promise of going to the playground afterwards), he picked it up! He can officially ride a bike. Three down, one more to go.