Back to Colorado (Leadville, CO) 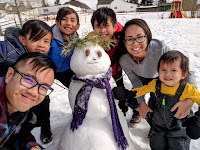 Taking two snowboarding trips in one season? That's a rarity. Doing that post-kids, that's unheard of. But we did it... the whole fam bam... for Spring Break. None of this would've been plausible if we didn't have the minivan, which I regret not getting sooner. Now, I see a future with many more road trips and our second trip with the van would take us back to Colorado. This time to Leadville.

Leadville was quite different from Arvada. First, it's a tiny town that's nowhere close to the city, which meant we're nowhere close to a Target! Yikes. How did we ever survive? Second, we were much higher up. The elevation was double that of Denver (5,000 feet vs 10,000 feet) and some of us felt the effects of altitude sickness (headache, shortness of breath). And it didn't help that our apartment was on the fourth floor of a building that did not have an elevator. 😬

But we managed to survive. Andrew and Tyson got to experience snowboarding for the first time. Andrew loved it. He wanted to do it again but lessons were all booked up for the following days. He told me he wanted his own board with a sloth graphic/design. Tyson was excited at the start of the lessons but when I picked him up, he looked miserable. He had a bad headache and the instructor said it was probably due to altitude sickness. We went snowboarding the following day of arrival, which probably wasn't enough time to adjust. Talking to him later, he said he enjoyed it and would do it again. Jacob, on the other hand, didn't want to ski or snowboard. "I just don't like it." Uh, he only did it once... five years ago! Oh well, I wasn't going to push it. It was a bummer though.

We also had fun off the mountains, exploring the town and discovering more snow.


And other random stuff on the road...

Overall, this was a good trip. From Leadville, it's only a 15 minute drive to Cooper and 30 minute drive to Copper, which was super convenient. Just don't confuse the two. Cooper is the smaller, affordable, less crowded mountain. Copper is the larger, more popular (and expensive) mountain.

I also liked the fact that the town was never crowded like the more well known places, e.g. Breckenridge, and everything was close. The downside was the limited food options but that just means we had to cook more.

Note to self: check road traffic, construction, and closures prior to departure. That drive home was brutal.