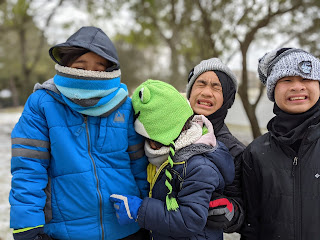 A winter blast is coming. The weather forecast predicted it days (if not a week) in advance... with a high likelihood of snow in Texas. How exciting! Or so we thought.
By Monday morning, Presidents' Day, the snow and cold weather came. We woke up to no electricity which went out around 1 a.m. Good thing the kids already had the day off or else everyone would've been late for school. Naturally, we played in the rare Texas snow. 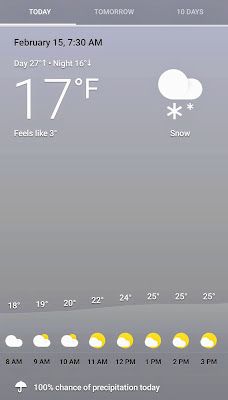 But when news outlets reported that the electricity wasn't coming back on until the following day, it was time to bail. Not that we were dependent on electronics but more for the lack of heat. With sub-freezing temps outside and no source of heat besides our gas fireplace, it was going to be miserable. We packed up and headed to Lynn's grandma's house for the night.
After a few hours of arrival, unpacked and ready to spend the night at grandma's warm house, she lost power. Uh oh. Time for Plan B. We packed up again and kept moving east... migrating to the next house that still had power, Lynn's sister house.
On Tuesday morning, around 10:30 a.m. our house had electricity. Yes, time to go home! But then around 9 p.m. the power went out. Uh oh. Candles out but it started to get cold. A couple hours later the power did come back on, at which point I cranked up the heat since who knows when the power might go out again... which happened in the middle of the night.
On Wednesday morning at 10 a.m. power was restored. But at 1 p.m. it goes out again. Then back on at 2:15 p.m. Then off again at 3 p.m. Then on again at 5:15 p.m. What is this madness? So whenever the power came back on, we scrambled to do anything that required electricity: cook rice and pasta, charge phones and batteries.
During the whole week, we either didn't have water or very little since the water pressure was really low, so there was a boil water notice in effect. No big deal, we had plenty of bottled water and the kids could just pee outside in the freezing cold. The boil water notice didn't get lifted until Sunday at 3 p.m.
Unsurprisingly, school was canceled for the rest of the week. What was initially a 4-day weekend for the kids turned into 10 days off of school. Lucky them.
It could've been so much worse... no food, no water, no heat. Many others had their pipes burst during the freeze so we came away from this unscathed. And I'm super grateful for our family and friends, who we can always rely on. 💗
Email This BlogThis! Share to Twitter Share to Facebook