Why Andrew should be renamed Jimmy Jr. (#1)

When the kids do something bad or ridiculous, Lynn and I jokingly say "that's your son" instead of saying Jacob or Andrew (and now Tyson). It's a statement that says there's no way that child is mine, so he could only be yours. This happens the most with Andrew. And with him being called "my son" or as Lynn likes to put it "Jimmy Jr."

Appearance-wise, I don't think he looks anything like me. But as for the personality, he's a carbon copy. Throughout the weeks (or months) I'll post reasons why Andrew is just like me and why we should just call him Jimmy Junior.

When I'm exhausted, I could sleep anywhere. On the floor, outside on the grass and even on a cardboard box. And I have the gift (or curse) to sleep through just about anything. Noise does not phase me. I've slept through my alarm clock multiple times, which shuts off on its own after a solid hour of continuous buzzing. Don't believe me? I have apartment warnings and failed mid-terms to prove it.

Andrew is the same way. He can sleep through a lot of noise and commotion, but so can Jacob and baby Ty, so maybe it's a kid thing. Or is it a Tran thing? Time will tell. When he's tired, he can fall asleep anywhere. This was first discovered when he was about 8-months-old. He had dozed-off as we fed him baby food. I mean, who falls asleep while actively eating? Only Andrew. 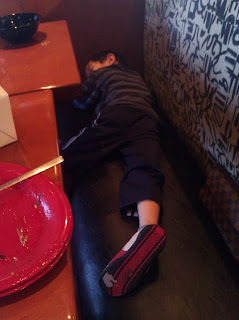 Here he is sleeping at Pei Wei. At least he finished eating before crashing. 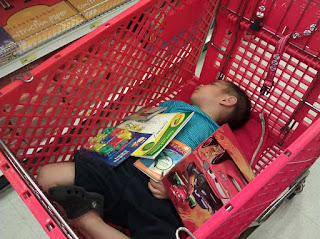 Sleeping while sitting in the child seat of a shopping cart was not an option as his body was awkwardly bent in the tiny seat. The next best thing was to put him in the cart. We still needed to shop so we just piled our stuff on top. 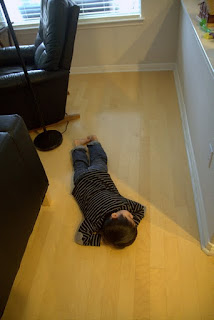