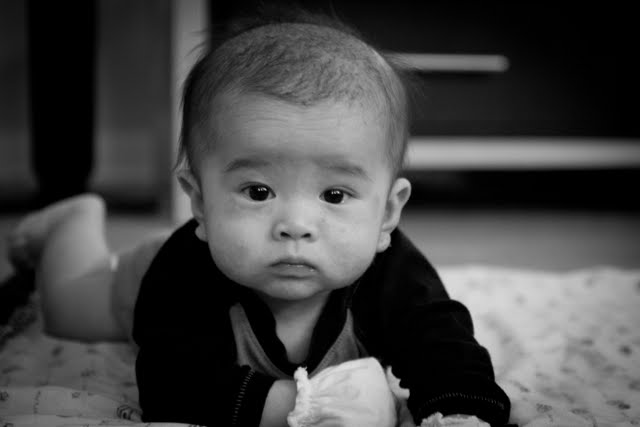 Keeping with one of my promises, I'm going to document all of baby Ty's milestones since we did such a good job (sarcastic tone) with the two boys. It's official, he can now roll on his own. As to the exact date of when he did this, I'm not too sure. Does it count if he rolled off the blankets he was lying on (the slight elevation helped him complete the roll onto his stomach)? If so, he did that before the new year. But rolling on a totally flat surface, he recently mastered that... right at the 5-month mark.

And we recently introduced him to food (coconut ice cream, pears and bananas) and so far he's quite receptive. He's not fully eating yet, as I think it's still too early, but at least he seems willing to try. If only he was that way with formula. I can't blame him though, formula stinks (literally).
Email This BlogThis! Share to Twitter Share to Facebook