Elf on the shelf

Do you know about the elf on the shelf? I didn’t. I’ve seen it in stores around Christmas time but it never crossed my mind to look at it… that was, until we received a special package from “Santa Claus” or as I found out, their Aunt Julie. (To my kids who may read this in the future, the secret’s out. Boom!) It’s interesting… basically the elf is Santa’s eyes and ears, reporting back to Santa on a nightly basis when the kids are sleeping, because how else could he keep track of the millions of kids around the world. He has elves to do his dirty work!


Since our boys don’t really believe in Santa Claus (my fault for not reinforcing it), I decided to go along with this elf on the shelf. So far, they are believers. You name your elf, which they chose to call him Elfie. He moves around nightly to a new location within the house. You can talk to him. But the most important rule, you cannot touch him or else he will lose his “magic”, meaning he won’t be able to fly back to Santa. 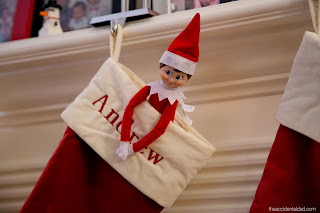 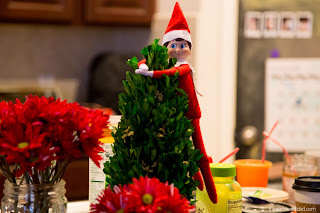 One day as Andrew was messing around (as usual), he knocked over the elf. He was devastated. That shows you how much he really believed. It took a long time to calm him down. It was a weird feeling. I felt like telling him that it’s not real and that he’s crying over a doll that fell. No biggie. But, if this all-seeing entity (sounds like the Eye of Sauron) keeps them from acting up, I’m all for it.
Email This BlogThis! Share to Twitter Share to Facebook