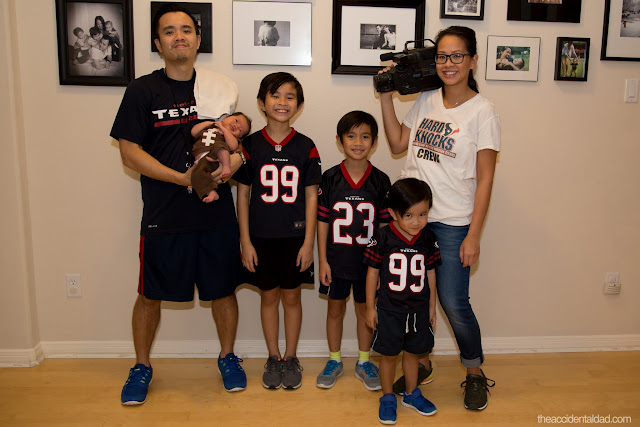 Our theme this year was Hard Knocks: Training Camp with the Houston Texans. I was Coach O'Brien, the boys were Texans players (yes, there are two JJ Watts), Lynn was the cameraman with a fully functioning old school VHS camcorder and baby Elliot was fittingly a football. We kept it simple, no elaborate costume making this year. There was just too much going on, mainly the arrival of a tiny little human.

Halloween kind of sucked. It rained all day long. The Halloween party was at my mother-in-law's house (7th year in a row, I think) but with many faces I've never seen before. It was crowded and noisy, with a bunch of people who didn't care to dress up. Tyson didn't want to go trick-or-treating. The kids only went out for a little bit. Everyone was soaked. Wet shoes and socks are the worst. I wasn't feeling it this year.