Dear Santa (or whoever)

Every year we have the kids write their Christmas list (so us parents have a clue on what they really want). And every year, they question the existence of Santa Claus. And lately their belief of all things fake (Santa, Elf on the Shelf, the tooth fairy) is quickly fading, especially for Andrew. If there is a discrepancy of any kind, he'll question it (he got that trait from me). And there have been times when he's called us out on them.

Are you the tooth fairy?

At this point, I don't think Andrew believes (or cares for) the tooth fairy anymore. Just last week, he lost his third tooth this year and it was also the third time he didn't care to put it under the pillow for "the tooth fairy." Before, the two big boys were so excited to see how much money she will leave them. But now he's disenchanted. He once asked Lynn, "Are you the tooth fairy?" She asked him why he thought that. "Because she has the same hand writing as you!" Busted.

Santa must be a ghost.

So at what point do you tell them the truth? I'm all for never telling them and letting them discover it on their own, which is going to happen sooner than later. But I also don't what them ruining it for the little ones, Tyson and Elliot. So if I tell them now, maybe they can be in on our secret. But if I don't tell them, they might poison the minds of the little ones into not believing. What are we to do?

Anyway, here are their Christmas lists, which will be sent to who knows where. Tyson kept saying that he didn't want his list sent to Santa. Why? Because he's terrified of Santa. (shaking my head) 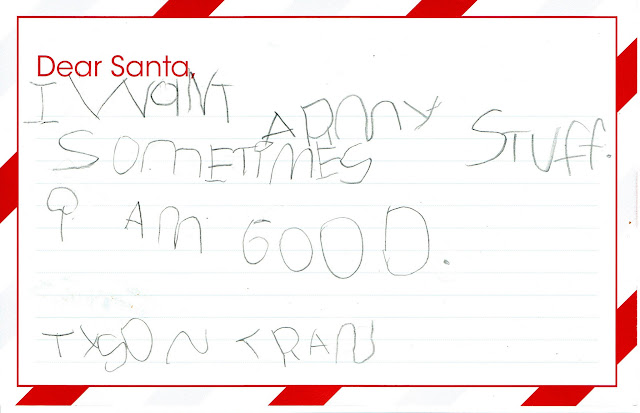 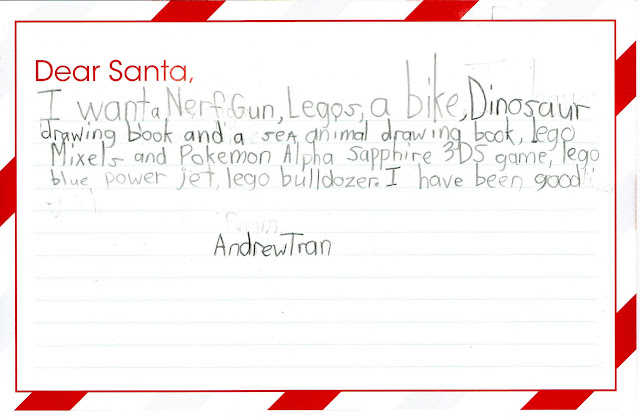 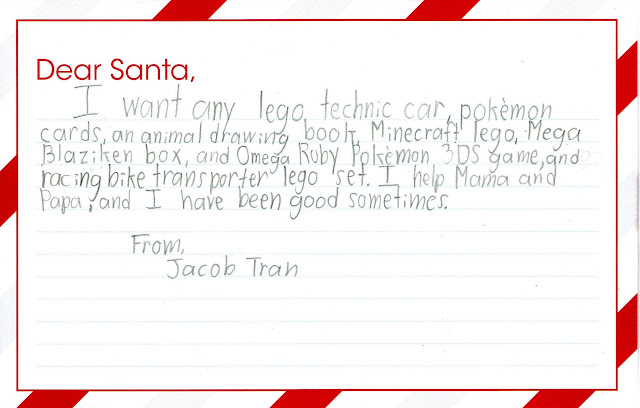