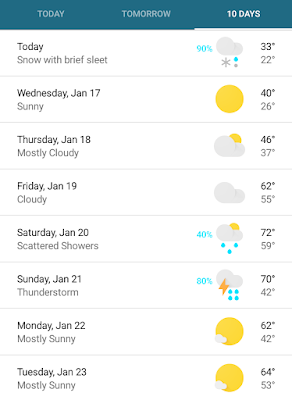 It seems that whenever there's a major weather event that requires schools to close, e.g. flood or ice, it tends to land on a holiday weekend. Our extended weekends get really extended, as seen with Memorial Day 2015 and Labor Day 2017. If I had the powers of Miss Cleo, I would've planned a proper vacation out of this city. And on this past Martin Luther King Jr. weekend, it happened again. This time, it was due to icy conditions.

The kids' 3-day holiday break became a long 5-day break (school closed on Tuesday and Wednesday). My job allows me to "work from home" (lucky for me since I didn't have to venture out on the icy roads) but I usually work out of a coffee shop since it's damn near impossible to get anything done at home. And now with all of the kids... forgettaboutit. But because of the weather, the coffee shops that I frequent were also closed so I had to actually work from home.


On top of that, there was a "boil water notice" on Wednesday and Thursday, which meant those local coffee shops remained closed... and more "working" from home. The boys were fine with it though. They liked that they didn't have to shower (gross).

It was just a big inconvenience. But life goes on. And as I write this, the outside temperature has already gotten significantly warmer. Only in Texas does the weather drastically change in a matter of days.