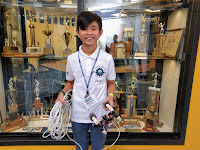 Jacob's team traveled to Dartmouth, MA to compete in the International SeaPerch Challenge after advancing in the regional competition back in April. Obviously, we were going to support his team so we made a family trip/vacation out of it since I don't ever envision us being in the New England area. The first half of the trip was spent in the Dartmouth/Cape Cod area and second half in Boston, which I will post about later.


Jacob traveled not with us but with his team and other members of the school district to UMassD. He spent the weekend living in the dorms. He slept on an uncomfortable plastic bed. He shared a tiny room with another teammate. He ate terrible cafeteria food. He was independent and got to experience life as a college student.


As for the competition, blah. Drama and miscommunication sums up Jacob's team. Between the district and regional competitions, the original team coach left along with her daughter (most likely due to conflicts with one of the kid's mom). So that same mom stepped up to be coach and essentially started over from scratch... doing it her way. Without getting into too much detail, she sucked... and I was ready for the competition to end.


The team finished 26th out of 81 teams. Decent for a team that didn't practice after regionals (or at least the coach never told us about it). It's a team effort, not only for the parent and her son. Ugh. Whatever. I'm done with them. But at least Jacob had fun and it was a good experience for him.


But it wasn't all about the SeaPerch competition... it was only an excuse to visit the Cape Cod area. We stayed with three other families (from another SeaPerch team) and had our own fun. While Jacob was experiencing the college life, the rest of us were exploring the area.