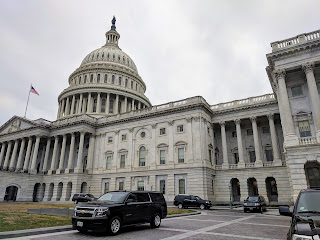 My long time friend (John) who I've known since the second grade (30+ years) was getting promoted to Lieutenant Colonel at The Pentagon so I wanted to be there when that happened. The initial plan was to take everyone and make it into a family vacation. But airfare to DC was pricey... multiply that by six... ouch. Plan B, road trip to DC. But during the planning phase, there were reports of snow storms across that region and I thought, I don't want to get stranded in the middle of nowhere, let alone drive through that. Plan C, I'll fly but only take the boys. But ticket prices never decreased and actually went up. Plan D, I'll go solo.

I figured I could scout out the city for any future visits with the whole family. DC is known for its museums but unfortunately, I came during the government shutdown so all federally funded monuments and museums were closed, i.e. no Smithsonian museums. On top of that, I got sick when I arrived... probably from the midnight kiss on NYE from my lovely (but sick) wife. Then my knee started hurting (simply bending it was painful) so walking was dreadful. Things were not going so well.


But it wasn't all doom and gloom. The first day in DC, I managed to walk over 7 miles exploring the Library of Congress, Capitol Visitor Center, and The National Gallery of Art (the only places opened at the National Mall) before my knee told me to stop.

The following day was spent at The Pentagon for a tour, followed by John's promotion. Afterwards we had a luncheon with his family and friends. I decided to stay in that night to rest the knee and recover from the head cold.

On the last full day, I felt much better and explored the Arlington National Cemetery in the morning. The first site I saw was the Marine Corps War Memorial. Then I made the trek to JFK's gravesite. And my plan was to continue on to the Tomb of the Unknown Solider but that was another 15 minute walk in the opposite direction of the Metro station and my knee was hurting badly. So I called it a day and limped back to my hotel. Later that night I met up with John and his friends for dinner and drinks, a nice ending to my solo trip to DC.


I've never considered traveling solo before (because I have a wife and kids) but it was unique. You're doing things on your own terms/schedule. There's no worrying about what other people want to do, or if they're hungry or tired. Navigating through congested places was a breeze. Finding a seat in a crowded eatery was easy. I probably won't find myself traveling solo again (for non-business purposes) but it was definitely an interesting experience.
Email This BlogThis! Share to Twitter Share to Facebook