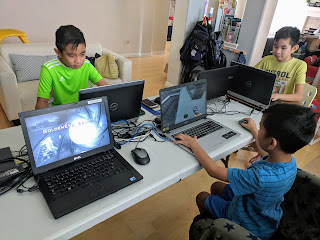 Although we celebrated Tyson's birthday earlier, we had another celebration for him on his actual birthday. We gave him the two things he wanted: a sleepover with his cousins and to play video games. So I setup a LAN party so that he could play StarCraft 2 (currently his favorite game) along with other multiplayer games. It was a weekend of non-stop gaming for my video game addict.

A LAN party is a gathering of people with computers or compatible game consoles, where a local area network (LAN) connection is established between the devices using a router or switch, primarily for the purpose of playing multiplayer video games together. (source: Wikipedia)