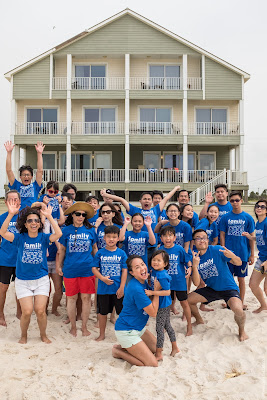 Last week, we took a family beach vacation to Gulf Shores, AL. And when I say family, I mean the entire family... from Lynn's side (my in-laws). For 6 nights, we had 29 people under one roof... And we were still missing a few people!

On paper, it sounds daunting but my aunts and mother-in-law had it under control. There was a lot of planning prior, from who's bring what to setting a daily menu... from breakfast to dinner. Even though one family would be responsible for one day of cooking, it seemed like they were always in the kitchen... helping, prepping, cleaning, etc. Hopefully they were able to enjoy themselves, to relax and make it an actual vacation.

By the second day, I was content. There's only so much you can do on the beach. And I was a bit defeated when I lost two canopies. Our big canopy was broken on the first day when a sudden storm with strong winds blew through. Then a few days later, my aunt's big canopy flew into my personal canopy, destroying both. This beach kicked my ass. 😑

But there was more to this trip than the beach. I got to know my in-laws a little better, who I'd only see for a few hours on occasional family gatherings. I got the do nothing, which was quite uncomfortable in the beginning. I tried not to think about work and the potential fires I need to put out when I come back. I've always wished that I had free time (no responsibilities) but when I actually had that opportunity, I initially didn't know what to do. Eventually, my daily routine was to sit outside with my cup of coffee and meditate (blankly stare at the beach), read and write. It was great.

The kids were also in their routine... waking up whenever they wanted to... playing non-stop with their cousins, whether that be the beach, pool, video games, wrestling, etc... eating and snacking on all the worst foods (cookies, ice cream, Kool-Aid)... all unsupervised and no curfew. They had a blast.

Overall, this was a nice relaxing vacation. A whole week seemed a bit long tough but fun nonetheless. Maybe this is the beginning of more future trips with the entire family.