As previously mentioned a couple weeks ago, I got to spend quality one-on-one time with Andrew which was dubbed "Andrew and Papa Day". With Jacob, it's much harder for me to get time alone with him since Andrew would always be in the picture. It's also rare to find a picture with only Jacob and I as seen with our most recent picture together (adjacent), which was taken in June 2011. But this past weekend, Andrew had a classmate's birthday party to attend so I had Jacob all to myself.

After dropping off Baby Ty with my parents (since it wouldn't truly be one-on-one time with Jacob), Jacob and I went to have lunch together at Donut Heaven & Grill. Jacob ordered the hamburger kid's meal and I had the Ole burger combo. Surprisingly, both of our burgers and portion of fries were the same. The burgers were okay. The best part were the buns, which were fat, glistened with butter and had almost a sweet taste to them. 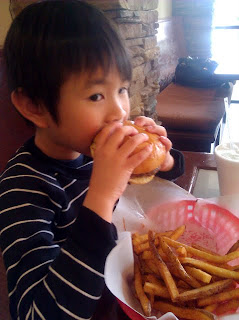 Our whole day revolved around getting yogurt (since I denied his initial request of going to The Aquarium) but after eating such a large meal (which we did not even finish) we had to let our food digest a little bit. I decided to take him to Barnes and Noble in River Oaks since it was relatively close to the yogurt place, it's bigger than the one by our house and he's never been there. Our goal was to find Level 3 (Grades 1-3) and Level 4 (Grades 2-3) books for him to read since Level 2 books were too easy for him. Apparently he's read the most books in his grade (Kindergarten). After reading to me, I let him loose to read whatever he wanted. He chose books on snakes. Typical.


Then it was off to our favorite yogurt spot, Yogurtland. They still don't have my favorite flavor (lychee) but I gladly settled for the taro and toasted coconut. Jacob got the red velvet batter and strawberry. After cleaning off our bowls, it was time to head home. 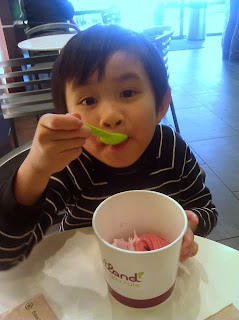 As I said before, I love the one-on-one time with each of my boys. Each kid is different in his own unique way. With Andrew, he's more wild and crazy. He talks nonstop. It's verbal diarrhea. But with Jacob, he's more calm and quiet. I have to initiate each conversion. But when you hit a topic of interest, e.g. snakes, dinosaurs, cars, he too can be a chatterbox. Now I can't imagine what my day would be like with a grown up Tyson. I can hardly wait.
Email This BlogThis! Share to Twitter Share to Facebook