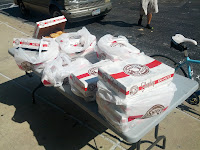 Last Sunday we did the Tour de Donut bike race. It's a 28 mile course that includes two rest stops... to eat donuts. Each donut consumed takes 5 minutes off of your race time so it's possible to finish with a negative time. But it's also possible to gain weight from a race. And it wasn't just any donuts, they were Shipley's! I thought I could easily eat a dozen donuts. To eat my favorite donuts, how hard can it be? Stupid me, it was very hard.


Roughly 10 miles into the race was the first pit stop. We were there for quite awhile waiting for Anh to catch up, which gave us more time to eat. I ate four donuts, which equated to 20 minutes off of my time but we were probably there for that long, if not longer.


Then minutes later, my body started to feel like shit. Side stitches and cramps. My stomach was not in a good place. I needed to purge. When we arrived at the second pit stop, I wanted no part of it. I never thought I would ever refuse a Shipley's donut. But I did.


Over two hours later, I crossed the finish line. It took me a little longer since I got separated from the pack and made my own (longer) route. Awaiting at the finish was a table of stacked boxes of FREE Shipley's donuts. No más!

The 28 mile (30+ miles in my case) bike ride was okay for the most part. My legs were fine but my goods and butt were not fairing so well. I laughed at the people wearing bicycle shorts but in the end, they had the last laugh. 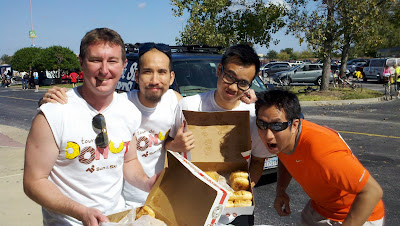