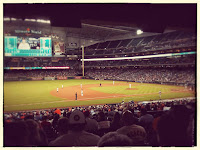 On a random Wednesday night, we went to see the Astros play the defending World Series champion, the San Francisco Giants. It's been three years since we last went to a baseball game so I was pretty stoked to go to a game this year. Are people still saying "stoked"? And the Astros are pretty good this year (currently first place in the AL West). Let's get on the bandwagon!

This was Tyson's first baseball game and he was definitely not ready for the boom of the train, the one that goes off for an Astros' home run. And it went off quite a few times as they hit three in that game. Boom!

In years past, we've never stayed for the whole game. Then again, the boys were so young and the Astros were terrible. This time around, the boys are much older (longer attention span) and the 'Stros are actually good. But it was getting late (for a school night) so at the 7th inning stretch, I told the boys we should leave soon. That's when the tears flowed... from Jacob. Awww. He was really into it. Okay fine, so we stayed a bit longer. It was tied going into the bottom of the 8th inning and that's when Springer hit a tie breaking (eventual game winning) home run. Boom! It was a good game and a fun family night out.