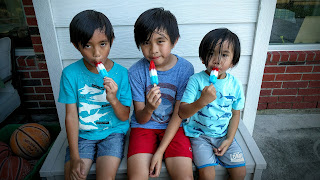 Summer break officially began for the kids this Memorial Day weekend and we started it off by going to the Houston Zoo on Saturday. We went since our membership was set to expire at the end of the month and I wanted to check out the new gorilla exhibit for the first (and last) time. After seeing Blackfish, I don't want to continue supporting organizations that keep animals in captivity. If you really think about, a zoo is an animal prison and we're just gawking at them.

And then the next day, a gorilla is killed at the Cincinnati Zoo because a parent lost track of her dummy kid who wanted to join the gorillas. They say the boy was 4 years old but so is Tyson and he has more sense than to climb a fence and play with 400 pound wild animals. Ugh. Bottom line, a gorilla (an endangered species) died because of dumb people (who should be extinct).


On Sunday was Elliot's baptism. Yes, it only took us 8 months to do it but we finally did it.

And on Memorial Day, we hung out with friends and family at the Nesbitt's house. Good food and good beer with good company. I was too busy having a good time I didn't take any pictures, except for one (see below).