A day with Andrew 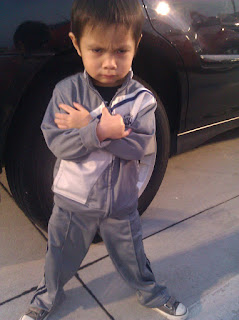 This past weekend, Jacob had wanted to stay over with the grandparents but Andrew wanted to come with us. It's rare that they split up but it happens on occasion. Several months ago, they had split up with Jacob sleeping at my parents and Andrew coming home with us and when it was bedtime, Andrew was crying for his brother. "I want Jacob..." It was funny and sad at the same time. So every time Andrew decides to leave his brother, we double triple check to make sure he realizes the consequence of his decision. At home, it's weird to see him play by himself. For his entire life, he's never been alone. He has always had his brother. So I feel guilty and obligated to play with him, not that I don't want to but sometimes there are things around the house that need to be done. But once I hear "con muon papa choi voi con" which translates to "I want to play with you papa", it's hard to say no.

That night we went out to eat. He was very well behaved, ate all by himself and drank like a fiend. He loves to drink. Once he downed all of my KFC soda and then peed three times in a span of an hour. We took him to BN afterward so he can read some car magazines and then we let him run around Town Center. He's got so much energy, always hyper and loud, as if he's on crack. It's tiring to keep with him and Jacob. I try to savor every moment, play with them every time they ask because there will come a time when they will stop asking.