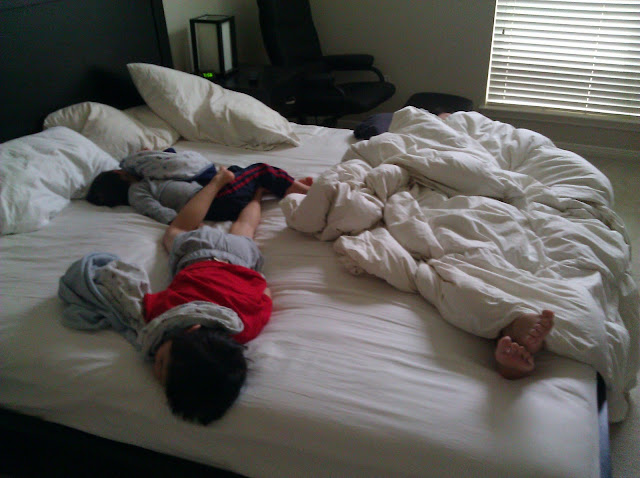 Not quite a good morning, just a morning. An all too typical one at that. This was the scene when I woke up this morning. Looks like they were trying to form letters to create a message for a passing plane as if they were on a deserted island. But if I were that pilot, I'd be a little confused. TI? Are they telling me they like the rapper TI? But I digress, we rarely have a peaceful night's sleep. The typical routine would be the boys sleep in their room at night, by 10 pm. Then around midnight or so, Andrew would come walking in, whimpering. Then at odd hours in the night, my guess is around 2-4 am, Jacob would climb into our bed on his own. Usually I'm such a deep sleeper that I don't notice any of this until morning but if I get hit or worse kicked in the testicles, (which hurts like hell -- to go from a deep sleep to intense pain, it's a feeling you can't describe and have to go through it to know what I'm talking about) I usually walk over to the boys' room to sleep. I'm so lucky to have my parents take them to sleep over during the weekends because sleeping like this for 365 nights a year, I would die.
Email This BlogThis! Share to Twitter Share to Facebook