I'm a loser baby, so why don't you get me a burger

Today was the end of the weight loss bet and unfortunately I was not the biggest loser. I was just a loser. Mike (Nez) won the bet with an impressive 24 lbs lost, 13.8% weight lost! The detailed results are posted in the weight loss page.

It's quite an accomplishment and to think Mike had already lost some weight before joining the bet. You have to see it to believe it.

Even though I didn't win the money (and bragging rights), I like to think that I won. I feel so much healthier and have more energy throughout the day. Those days of feeling sluggish and bloated are over. I haven't been this light since high school. My next goal is to bulk up, not like those muscular dudes with no neck, but to get some meat on my skinny arms and body. A secondary goal is to get that 6-pack and <10% body fat, which should come with bulking up. Let's keep this shit going!


Today I was in the 'hood and a block away from where I was working was Champ Burger. Once I saw this joint, I knew I had to try it. Looking at the exterior, you wouldn't expect a place like that to produce good food. But it's like the old saying, "Don't judge a book by its shitty exterior". The burger was thick and juicy. It wasn't "gourmet" or restaurant quality but it was a good homemade burger. This was nostalgic for me. It reminded me of the many times I used to walk with my mom along Bellfort St where my parents used to work to get burgers at a similar place called Dairy Maid. If you don't know, Bellfort was also a not-so-safe part of town but as a kid, I was oblivious to the dangers of the outside world. The only thing on my mind was getting a burger in plain white wrapping with a toothpick in the middle. And that memory triggered a memory of when I took Jacob along to pickup a lawn trimmer at Sears over by 59 close to downtown. I'm walking along the sidewalk with both hands occupied holding this huge box that contained my trimmer and Jacob is gleefully skipping along, oblivious to that bum staring at him. Taking that long walk back to the car, I was a little worried if something were to happen because I'm holding this gigantic box and feared that I wouldn't be quick enough to react. But of course I didn't show that on my face as I kept talking to him but constantly scanned the surroundings around me. It's nice not having any worries in life, totally oblivious and carefree. It's nice to be a kid. But I digress, Champ Burger is good and it's definitely worth going back. 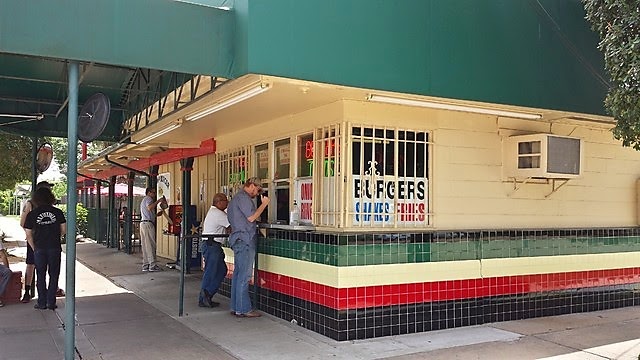 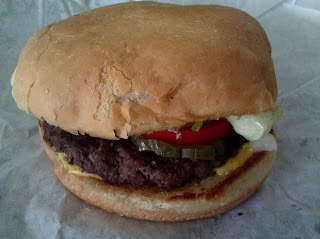