Independence Day weekend was the beginning of my independence from eating healthy. This was the first weekend since the end of the weight loss bet. This was all going to end very badly.

My eating binge began on Saturday with lunch at Thai Cottage. We got our usual order of pad Thai and yellow curry with a Thai tea. The lunch special also came with an egg roll and salad with peanut sauce. Total cost with tip... $15. If you're ever in the Pearland area and want some good, affordable Thai food, come here. Support them as I have a feeling they may close soon due to the lack of business.

Saturday night I fulfilled my BBQ craving by eating at Pappa's BBQ. I got the chopped beef sandwich with fries. The sauce has a distinct taste, a non-spicy kick to it, which makes it only okay for me. The best part of the meal was the free soft serve ice cream. It was really good but that may be due to the fact that I've been deprived of ice cream for the longest time. 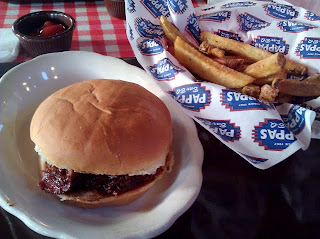 Sunday was spent at Mike's place as he used his newly found income from the weight loss bet to buy a shitload of steaks and ribs. I also had beer (which was delicious and also probably due to deprivation) and Lynn's homemade, handheld, personal apple pie. The food coma hit me hard and I fell asleep on the couch. When I woke up, I ate some more. Not good. But all of the bad eating will soon end since we established another bet. This time it will be the first person to reach to goal of <10% body fat and the stakes are higher since the goal is so extreme. We had to take it up another level. The details will be posted in the weight loss page.

Monday, July 4th we took the boys to their first movie at the theater, Cars 2. My thought was that this shouldn't be a problem e.g. they want to leave early, since Cars is their favorite movie. When we get there, Andrew looked shocked. He sat up really stiff with a worried expression on his face. Jacob was fine. By the end of the Toy Story mini-movie, he was fine. No whining, no restroom breaks, no problems. This went surprisingly well. And I thought the movie was decent, even though the movie got ripped by critics. I mean, your audience consist of little kids like the ones pictured below so if you had the cars race for the full two hours and had no storyline whatsoever, they would still like it.


After the movie we had lunch at Burger 101. Another burger place where you start out with a plain burger and add toppings of your choice... cheese and special items cost extra. Sadly, the grilled onions and mushrooms were extra. Boooooo! (It's free at Mooyah!) The burger was okay but it would have been better if they baked their own fresh buns. The onion rings were different but in a good way. They were crispy, not greasy at all or overly salty, and the onion stayed on the batter, i.e. didn't slide out completely with the first bite. The batter tasted like the ones used for chicken fried steak. The onion rings were the best part of the meal. 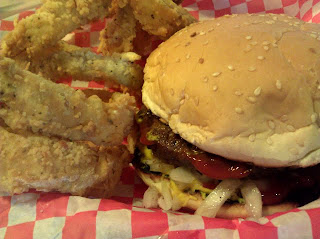 July 4th night was spent hanging out at my parents house eating non-American food. We didn't care to see any fireworks this time around. Besides, it just too effin' hot in year.

My weekend continued onto Tuesday since I took the day off. We started the morning off going to one of my favorite stores, The Container Store. I heart organization. After an hour of interrupted browsing (due to two overly active boys), we had lunch at another favorite, Andre's at Uptown Park. I got my usual... the crab cake sandwich on croissant with a side of tomato basil soup and ice tea. I don't eat it as it should (sandwich-style) but eat the crab cake with sauce, croissant, and soup all separately. This is the last open location (River Oaks and Rice Village closed). If Andre's closes for good... I might go into a deep depression. 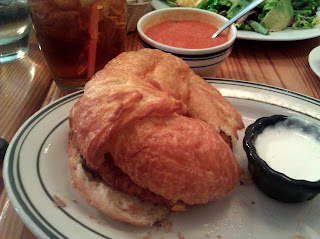