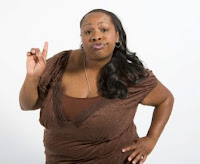 In my line of work, I get to meet a lot of people. And everywhere I go I've gotten a lot of compliments on my new pair of eyeglasses (I broke my previous frames). I'm not here to brag but to point out one common trend of those compliments.

ALL of those compliments have come from African-American females in their twenties-early thirties. I have yet to figure out why. What is it that makes these ladies like my frames? It's quite nerdy and the furthest thing from "gangsta" as I believe the stereotype that everyone in that demographic likes gangsta rap. I doubt they listen to Buddy Holly (or even know who he is) as he's the only famous person I can think of who donned such frames... well besides Paul Pfeiffer from The Wonder Years.

The typical question after a compliment would be "Are those prescription frames?" Uh, yeah. I'm not that trendy or hip to where prescription-less frames. It's the equivalent of wearing an eye patch when you have two good eyes or rolling around in a wheelchair when you can walk perfectly fine. But you know what I do think is cool... walking around on crutches. That would be awesome.