Another three-day weekend thanks to the US government. (I also appreciate Memorial Day weekend.) I'm not too sure what the meaning of Labor Day is all about. I thought it meant that it was a day people take off work, free of labor for that one weekday. But apparently it doesn't apply to anyone who works in retail or else who would operate the stores for all of those Labor Day sales?

Saturday night we went to a skating rink for Lynn's cousin's birthday party. She turned seven. Yes, there's a big disparity in age. Anyways, I thought skating rinks died with the 80's. Stepping into these place felt like going into a time warp. The decor, music, and overall ambiance made you feel like you traveled back in time to one of the greatest decades ever, the 80's. It's a shame that I can't roller skate or else the kids would of had more fun. I couldn't take them out on the rink since I could barely stand up myself. How bad would it be if I took down my own kids. I would feel terrible. The kids had fun watching but I'm sure if would have been better if they were skating with everyone else. 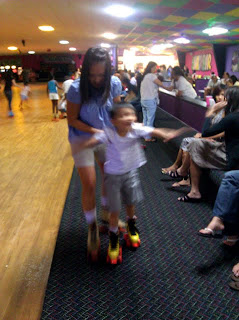 Sunday afternoon we had a few of our cousins come over for some burgers and dogs. I cashed in my weight loss bet with Peter and it wasn't even close. Easy money. Hanging out in the back patio, Mike randomly conjures the idea of jumping over the boys cardboard house. We were debating on whether it was possible and not long after, Mike hurdles the house with no incident. So I was egged on to do it but I knew there was no way I could or would do it. So my other cousin Jon (Zinc) was going to attempt the jump. Then out of nowhere Mike decides to leap over the house again but this time failed. There was no jump. Mike ran full speed into the house and destroyed it. He had stepped into a hole/crack in the grass (due to the drought) and rolled his ankle. After what seemed like a minute of laughing at him, he wasn't getting up. We asked if he was alright, at which point he responded "No". His ankle immediately swelled up and their stay at our house abruptly ended. They were headed to the ER. The kids' main concern was for their house. "Awww man. Our house is broken." They did not care how Uncle Mike was as they looked at him, agonizing in pain, in what was left of their cardboard house. It was funny and sad at the same time. 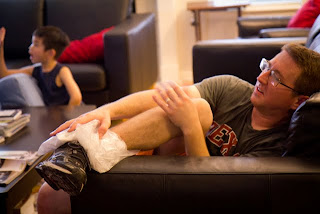 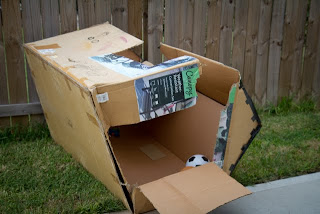