We were, as you might have guessed, Angry Birds. Yes they're everywhere right now from plush toys to candy, and it's overkill but what other theme could we have been that has five (or more) different characters and relatively easy to make? Besides, the kids liked them and most importantly, willing to be them so it was an easy choice. 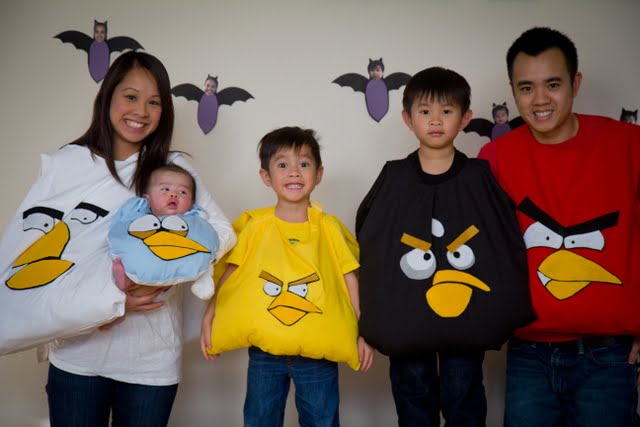 I made the faces and Lynn did the bodies. Much, MUCH cheaper than buying the "official" Angry Birds costumes at the stores. Andrew chose to be the yellow bird because he was the fastest. He mimicked it many times by running full speed around the house while wearing his costume. Jacob chose to be the black bird because it could explode. The blue bird was chosen for baby Ty because it's the smallest bird. Lynn got the white bird because it laid eggs and according to Jacob, only girls can lay eggs. And I get the one leftover, the ordinary red bird who has no special ability whatsoever.


That night we headed over to my mother-in-law/Lynn's mom's house for a Halloween party. (I have yet to decide which to consistently use: mother-in-law or Lynn's mom.) There were plenty of ghostly and ghoulish  treats (and real food too). It was a nice night for Trick-or-Treating as the temperatures were in the cool 60s-low 70s. The boys (minus baby) had fun. Baby Ty was too busy being a baby so he didn't get to go out.

The whole day was exhausting though. I actually had the day off work but most of that time was spent recovering from a cold, which included three naps during the day.  I was in bed and unconscious by 10pm. Next year will be better since baby Ty should be walking by then. Too early to start thinking about costumes for next year? I think not.


Commentary: There are two types of people who should not be allowed to Trick-or-Treat or just denied candy.
1.  Those who going through puberty or older. This is for the little kids and not for the obnoxious teenage punks walking around thinking that they're the baddest people on the planet.
2.  Those with no costumes. Total strangers are spending their hard earned money to buying candy so that they can give it to you. The least you can do is put out some effort on your end. Go to the dollar store and buy some props. Put a paper bag over your head and pretend you're a Colts (or Dolphins) fan. Anything!
Email This BlogThis! Share to Twitter Share to Facebook