I'm feeling lazy so this update will involve visuals (pictures and video) of some things that happened this past weekend. But it won't be your typical pictures.

Friday afternoon I took the boys out (via wagon) to the soccer field to fly our huge Styrofoam airplane. It was quite windy and contrary to the video posted, it flew pretty well. And yeah, I asked them if they needed to pee before we went and as always, the answer was "No." 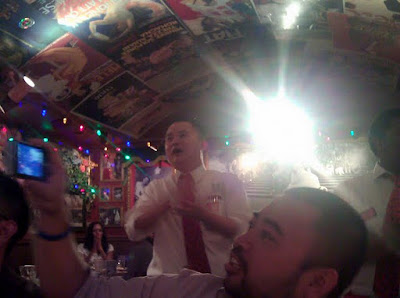 Friday night we ate at Buca di Peppo for a birthday dinner. Normally you may expect to see pictures of food and/or people. Nope. Here a picture of our waiter, William Hung. Or maybe it was his long lost twin or a super fan who is so obsessed with him that he tries to duplicate his look. It's probably hard to tell due to my cell phone's picture quality (or lack thereof) but he looked exactly like the one who sang "She Bangs". 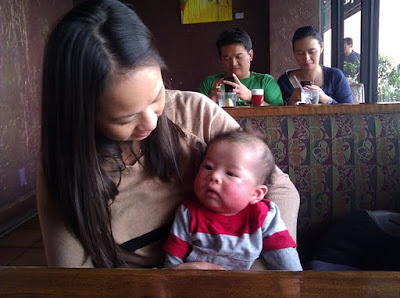 Saturday we had lunch at Ruggles. What's wrong with the picture here? No, it's not baby Ty. That's just eczema. It's the couple sitting in the next booth, with each one glued to their phone. I know I'm not using the correct adjective here but how gay is that. Maybe they both had laryngitis from screaming at a Metallica concert and were texting each other since they lost their voice. But that reason doesn't seem likely. I mean really, who would want to see Metallica? Sitting on the same side of the booth makes it look even more awkward (and ridiculous). 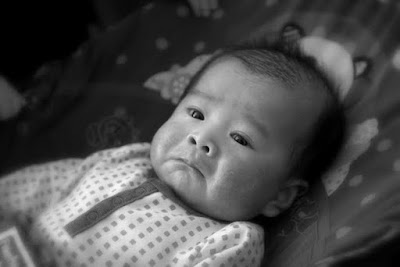