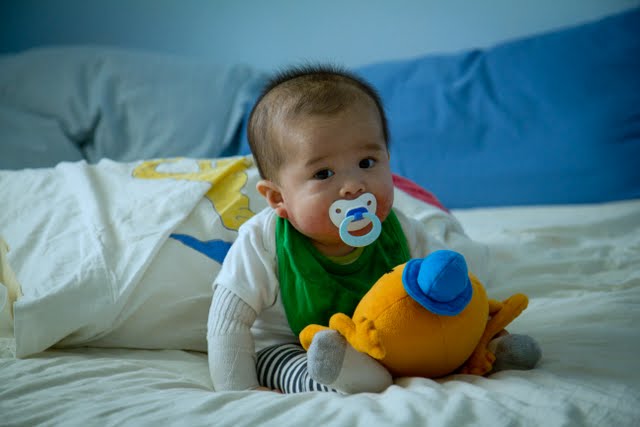 Here's what happened this past week (all before turning 7 months-old). First, Tyson was able to take a pacifier. Parents have a hard time getting a child off a pacifier but we're having a difficult time of getting him to take one. It would make things so much easier... like calming him before nap time and during car rides. It was only for a day so we'll see if it sticks.

Tyson has also started to babble. I don't mean those random sounds like "ehhh" or "ahhh" but it looks like he's trying to articulate his words, curving his lips to make sounds. His first sound is "be" (bih), pronounced with a short "e", like the first syllable of the word begin. He says it over and over but it's cute when he wants something, he will say "be" with more emphasis.

After a month of when his excessive drooling began, a tooth has finally appeared. Although it barely sprouted, he is now officially teething. Time for more fussiness.
Email This BlogThis! Share to Twitter Share to Facebook