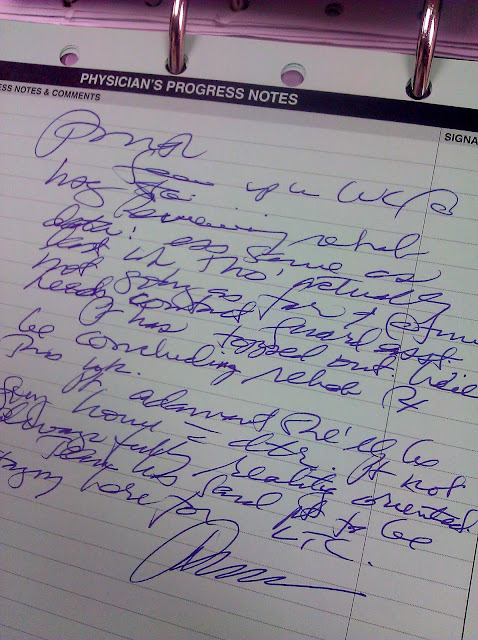 In my line of work, I see bad handwriting all the time. But for some reason, I could not read this physician's note for the life of me (well, the first half). This is not even that sloppy. I've seen much worse. I have come across handwriting that looked more like hieroglyphics than actual letters. Then there are those that were written by someone who refused to lift up their pen so it looked like an EKG reading (or recordings from a seismograph). As for this note, I would categorize this as neatly illegible.

But why write so messy? Are you in that much of a rush? Are you doped up on caffeine? Why cause potential medical errors due to such poor handwriting? Granted, this particular note won't harm or kill anyone (it just mentions something about rehab) but the other critical orders, especially the ambiguous ones, can harm and/or kill someone if it's misinterpreted. Just because you have some extra letters behind your name, you think that gives you the right to write like shit. So the advice I have for those people out there... slow down motherfucker.
Email This BlogThis! Share to Twitter Share to Facebook