More running in the mud 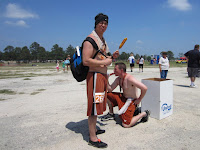 Last weekend we ran the Mudder Dash Mighty Mud Dash. The sudden name change was probably due to a conflict with the bigger, more popular Tough Mudder (which we will eventually do too). Now that I'm more fit and in shape, I would like to do a 10k race, then a half-marathon and God willing, a full marathon. I can't imagine myself doing a marathon but then again, I never thought I could run a 5k without stopping. Now that's child's play. 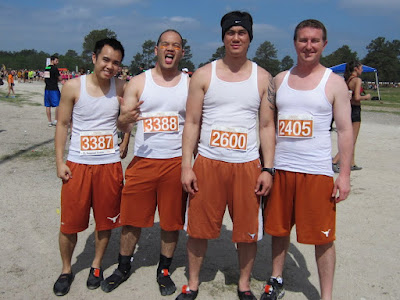 The Mighty Mud Dash seemed harder than the race we previously did (Warrior Dash). With a race time of noon, it was hot. The sun was merciless and without any clouds to save us, we all got burnt. As I'm writing this, my shoulders and back still hurt. I have a distinct wife-beater tan line and my skin tone looks dark brown with a mix of red. The race itself was essentially a long run with intermittent muddy trails (so muddy that your shoe gets sucked in and stuck) and all the obstacles were at the very end of the race. Ideally, I would have preferred them to space out each obstacle throughout the course but what can you do. My time was actually faster than Warrior Dash but damn was I tired. 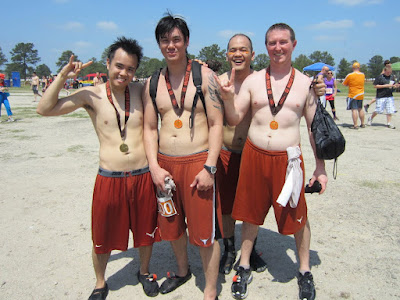 On the plus side, they had unlimited beer after the race. It's usually one free beer but they didn't require anything for the beer. And a couple of people randomly gave our group their tickets which meant food for everyone. Free food and beer... it's doesn't get much better than that.
Email This BlogThis! Share to Twitter Share to Facebook