Yes, once again I'm writing about/eating cupcakes. It's a sickness. The one positive of traveling with my job (it's barely a positive... it's me "looking at the brighter side" of things) is that I get to go to places I would never normally go, i.e. College Station, Brenham.

Yesterday I had to work in Katy and while driving I spotted Ooh La La. It was located within many industrial buildings and warehouses. I'm surprised I even noticed it.. I just have an eye for dessert places. In addition to having cupcakes, they also have regular cakes, cheesecake, eclairs, cookies, creme brulee, drinks, etc. I looked online at their menu before coming and I had a set of cupcakes I wanted to try. When I got there around 4pm, their shelves were bare and were sold out of all the flavors I wanted to try. They either don't make much or it's really that good and people buy it all up. I ended up with a strawberry and chocolate cupcake, and a mini red velvet (since the "regular" one was sold out). These cupcakes were huge, the size of a muffin, yet at the standard "high-end" cupcake price of $3.25. They were moist with a whipped frosting. It was okay, nothing special though. My favorite strawberry cupcake is still the one from Sprinkles. 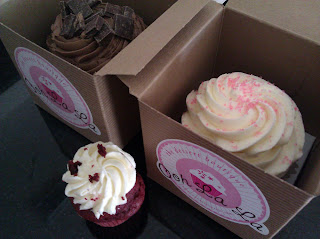 
Since the title of this post is "ooh la la", I figure I'd write about my food experience at Ikea this past Monday. I never thought to ever eat at the upstairs cafeteria as I always go for the 50¢ hot dogs. Who can pass up a sale son? -Dave Chappelle. But when I saw the sign for their "big breakfast" which included eggs, bacon, potatoes, and french toast sticks for $1.99 (ooh la la)... I had to go for it. The scrambled eggs were weird, to say the least. It was in one solid mass and had the consistency of flan. The potatoes were good and the french toast sticks were quite addicting. Not bad for two bucks. The meatballs and mashed potatoes tasted like the  Swanson salisbury steak dinners you find at the frozen section of a grocery store (not to be confused with those shitty Banquet dinners) and the macaroni and cheese tasted like it came straight from an elementary school cafeteria. Don't get me wrong, I like Swanson frozen dinners and good old cafeteria food. Besides the questionable eggs, this was a pretty good meal and for that price, you can't beat it. 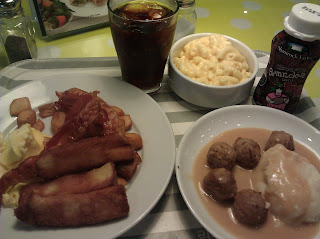