Diapers are expensive. And with baby Tyson going through so many in a day, I am bleeding money. Being the smart shopper that I am, I get my diapers through Amazon's Amazon mom program (30% off). Why couldn't it be called Amazon parent or Amazon legal guardian? Moms are not the only ones caring for a child nowadays. Come on, we're in the 21st century now. But I will forgive Amazon as their customer service is outstanding and Prime is like crack, I cannot go back to anything less than free 2-day shipping.

So as I'm shopping online for diapers, I come across the following: 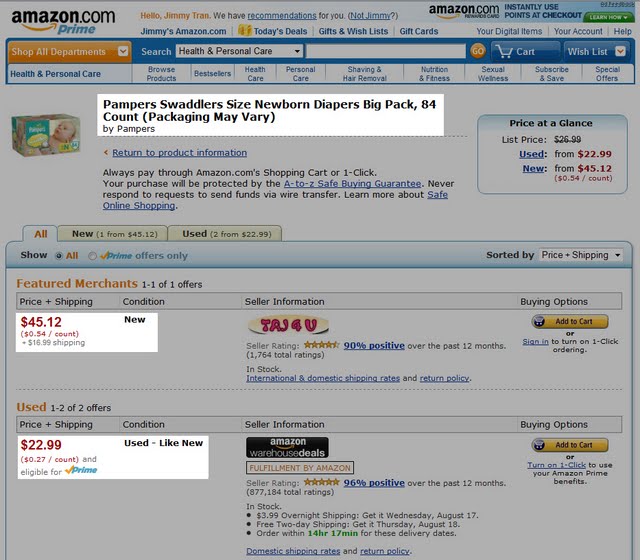 Used diapers? I had to read that over again. "Used - like new". That has to be a typo. But look at the price difference. It's so much cheaper (half off!) so obviously there has to be something different about them. Can it truly be used? Can they legally do that? Maybe those diapers have just a little pee on them and none of them have poo. 1% of me says that they might actually be used while the other 99% says that I'm stupid to even think that.
Email This BlogThis! Share to Twitter Share to Facebook