Sorry if you were misled and thought that I was going to discuss one of MTV's best show (besides Jersey Shore). If you don't know what I'm talking about, Bully Beatdown is hosted by Jason "Mayhem" Miller, an MMA fighter who people either love or hate. He's got charisma and if you're ever bored, check out his fight entrances on YouTube. On the show, they invite a bully to fight an MMA fighter for a chance to win some money but in the end, the bully never wins and gets destroyed in the process. It's quite hilarious.

I guess I discussed the show a little more than I wanted to. Back to the original subject, this bully beatdown involves my little one, Andrew. Last week we got an incident report from school that stated a kid slapped Andrew in the face. When I read it, I was beyond pissed. Why would anyone hit him?! The report doesn't name the kid involved, I'm assuming to protect from retaliation, which is a good idea because I wanted to meet the parents of this rotten kid and give them a piece of my mind. Ah, but I have their class picture and asked Andrew to point out the boy that hit him and surely enough, it was the bully of the class, RJ, or JR, or BJ, I don't remember his name as I don't really care to waste any brain space on that punk kid. Apparently this boy terrorizes everyone, not just Andrew. Well I asked Andrew what he did after the boy hit him and he sadly said "nothing..." Ugh! I told him, "If someone hits you first, hit him back. Then tell the teacher that he hit you first. But never hit anyone first." I repeated this over and over to him. I'm going against the grain here by telling him to retaliate but I can't have him sit back and do nothing. Just telling the teacher is useless. If I got an incident report that stated Andrew hit a kid, but in retaliation, I would be perfectly okay with it. Andrew is not one to provoke anyone or start a fight (though Jacob might disagree).

Yesterday we got another incident report. Andrew got hit again. What the fuck! Lynn had talked with the teacher that day and she said that when the boy hit him, Andrew hit him right back and made the boy cry. That's my boy! After reading the report and getting the summary from Lynn, I went over to Andrew and our conversation went like this:

What happened at school today?
Nothing...
Did someone hit you again at school?
Yeah...
What did you do?
(silence. his face turning as red as an apple.)
Did you hit him back?
Yeah... (head still down)
Good job! That's exactly what I wanted you to do!
Yeah! I boom him!
Yeah!
I went pffff! (reenacting his punch)

I'm so proud of him. 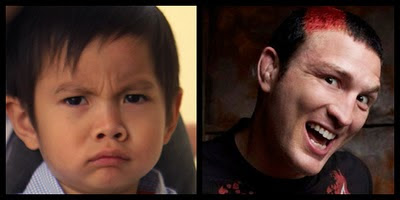