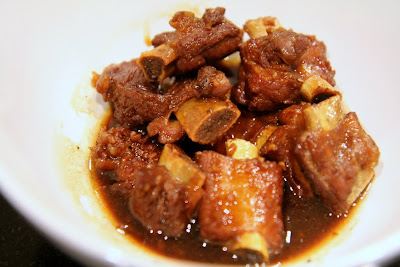 I was inspired once again. My friend Viet had posted a picture of his braised short ribs and I had to try it. It's very simple and essentially a thit kho recipe. But yeah, I don't normally eat Vietnamese food that often so it's an anomaly that I've been craving Asian food for this long.

chicken broth, as needed
[add enough to cover meat]
[bring to a boil, cover, turn down heat and cook for 1-2 hours]
[uncover, bring back to boil, reduce sauce]

In this recipe, I used chicken broth since I didn't have any Coco Rico and added a little more sugar to get the sweetness I'm missing. You could probably use water instead of chicken broth. My intention was to leave it on the stove for 4 hours to get the meat really tender but I was getting too hungry. A little over an hour, the meat was already tender and fell off the bone. I reduced my sauce to intensify the flavor, so a little goes a long way. I learned my lesson with my first bowl, as my rice was drenched with the sauce... it was super salty.